The Snake Style System of Yang tai chi is the most martial and exclusive of the three Yang style forms – crane, tiger and snake.
Grandmaster Yang Sau Chung learned this system from his father, Yang Chen Fu, and passed it on to his male heir and First Disciple, Ip Tai Tak. 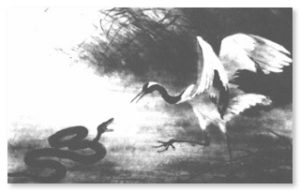 In turn, Master Ip taught this system to his Disciple, Robert Boyd. Before his death, Master Ip gave Mr. Boyd permission to teach this system without prejudice to those who seek a deeper martial understanding of Yang tai chi.
The Snake Style of tai chi requires great flexibility of the spine, hips, rib cartilage and internal muscles of the abdomen and upper thoracic ribs and back. The serpentine movement of the snake style moves the center of gravity using ‘core’ muscles. These core muscles strongly root the foot at the completion of each posture, sending powerful jin energy through the spine to the hands. The result, over time, is the legendary ‘iron in cotton’ phenomenon that gives speed, power and sensitivity to the hands and arms. This is the key to the successful use of tai chi in self-defense.

Common misconceptions about the Snake Style

There are many misconceptions regarding the snake style that I would like to correct. First, the snake style is not the tiger style done very low. The concept of ‘snake’ refers to the manner in which one moves in tai chi. Movements in the Snake Style originate in the trunk of the body, not in the legs.

Secondly, the snake style is not dangerous to practice. I suffered two major injuries in my body by practicing the tiger style. One was an SI joint injury that came from tucking my tail bone (very bad and incorrect idea). The other was a rotator cuff injury resulting from dropping my shoulders forward in an attempt to (mistakenly) apply ‘hollowing the chest’. Practicing the Snake Style has been very therapeutic for both injuries and both have greatly improved thanks to practicing Grandmaster Ip’s tai chi.

The subtleties of the Snake Style System are hardly discernable to the eye. The hand positions are less extended than the tiger style, and certain hand positions are angular as opposed to straight ahead. The snake style also centers the bodyweight 100% on the standing leg, clearly defining the substantial and insubstantial leg in every stance.
The snake style offers the tai chi practitioner the potential of great martial prowess. However, the application of flexible strength in performing the snake style, including the animation of the spine and core muscles, make the snake style also a powerful exercise for health and longevity.